This is my method for changing out the timing belt on the Neon SOHC. The DOHC is going to be very similar except that you'll need to line up the cam gear marks differently since there are two cams (duh). This is specific to the '95; your year and model may be different but the procedure is still the same until 2000 model year Neons. 2000-up have a different passenger side engine mount among other things. DOHC owners will have a tough time getting to the two power steering bolts as the intake manifold is in the way. You have to remove the timing belt to change the water pump so this would be a good time to change out the water pump as well. You should also replace the cam seal(s). You'll be right there anyway. They're about $4-$6 each. Shop around before you buy a new timing belt. Dealer list is approaching $100. You can find good quality belts at normal auto parts stores or online. Figure about $35 and up for a new one. Many people also replace the idler pulley, check yours to be sure it spins relatively freely.

If you have them, USE AIR TOOLS! It saves time and wear and tear on yourself. You will need both inch-pound and foot-pound torque wrenches. Torque settings from the '95 service manual are in a short table at the bottom.
This is a long page with many pics for the best illustrations I can give you for help. Give it time to load.
Questions? Comments? e-mail me: Jeff B#2
Here we go...

Get the car up in the air a little to make life easier for yourself. Not too much or you'll get tired of reaching down over the fender inside the "engine bay". Remove the front wheel to gain easier access to the front of the engine. 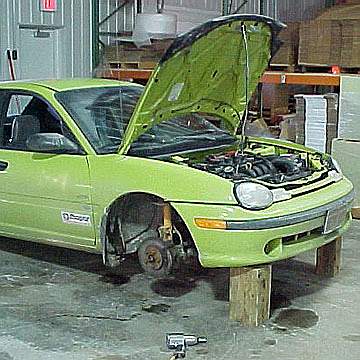 Remove the three 10mm bolts and the single plastic clip to remove the inner splash shield underneath the right front of the car. Two of the bolts are up in the tire well and are a little hidden; dig around for them and use a long extension. 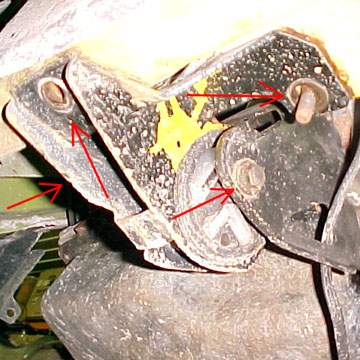 Put a block of wood on a floor jack and place it under the oil pan. Put a little pressure on the engine at this time. Just enough to lift it a little and take the resting pressure off of the side engine mount. Not enough to collapse the oil pan... 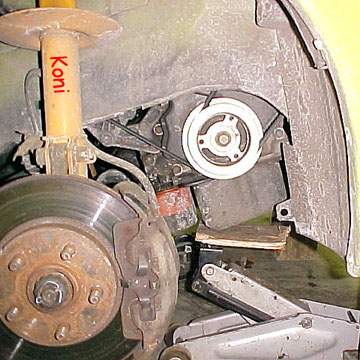 Remove the Purge Solenoid that sits on the top of the right side engine mount; it pulls straight up and off. Unplug the elctrical connector and remove the two vacuum lines. Remember which one goes where or leave the rubber line for ONE of them attached to the solenoid to help you remember. If all else fails, look at the pic below. The bottom port goes over to the hard plastic line to the throttle body. 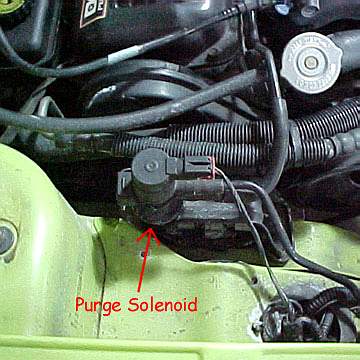 Remove the plastic plug from the car body to access the "thru bolt" in the engine mount. Grab a long extension, a flex joint and a 19mm socket and take out that "thru bolt". Then remove the two 15mm bolts that hold the mount to the car. Remove the mount itself. 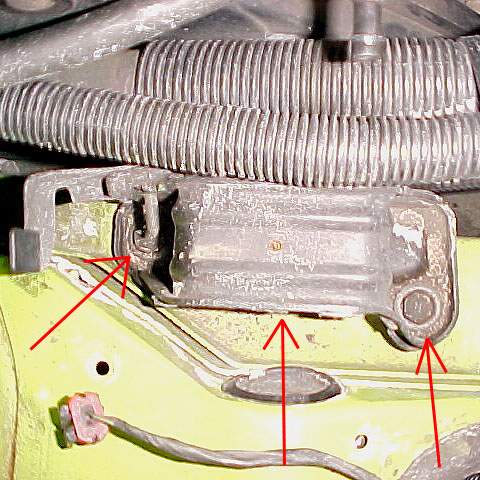 Remove the two 12mm bolts that hold the power steering pump to the engine bracket. Remove the V-belt. If you have A/C, it mounts to a solid bracket and nothing needs to be done with it. 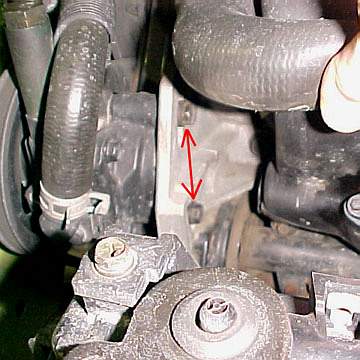 Loosen the "swing bolt" for the power steering pump. About 2 or 3 full turns is enough for now. The hole in the power steering mounting bracket is slotted to allow it to be removed without completely removing that bolt. Wiggle the pump out and swing it back over the valve cover. Tie it back if you prefer. 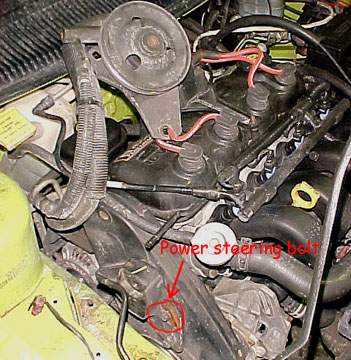 Loosen the 15mm nut at the top of the alternator and the 15mm bolt at the bottom of the alternator. Then loosen the belt via the 13mm bolt on the back of the alternator bracket. If you have a stock airbox on the car, this bolt is a little tough to get to. I usually lay over the engine and reach around the back. You can do it from underneath the car if you want. Remove the belt. 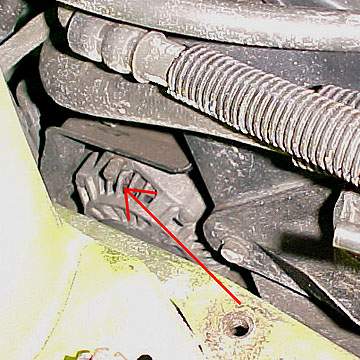 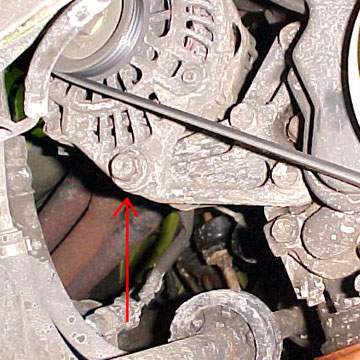 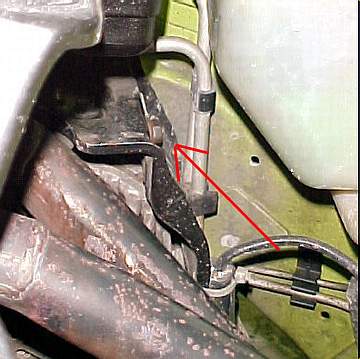 Here's the fun part. You need to remove that big bracket on the front of the plastic cover. It's either cast steel or aluminum, both versions exist. You already loosened one bolt when you removed the power steering pump. Unthread it the rest of the way. Loosen the other two 15mm bolts. You'll notice you can't get them out all the way. Lower the engine with the floor jack enough to remove the bottom bolt. 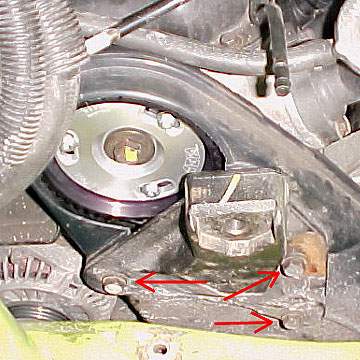 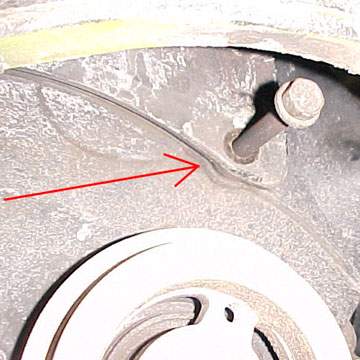 Jack it back up until the top front one just barely clears the inner fender. Wiggle the bracket around until both bolts clear and then remove the whole thing. Lower the jack again to a "near-normal" postion. 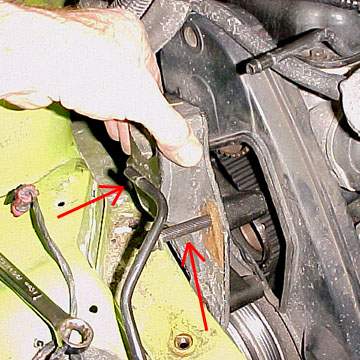 Remove the crank pulley. LOL! I bought the MAC tool to remove it and the Miller install tool to put it back on. No, the MAC tool won't work on the AF/X or ModernPerformance pulleys but it works great on the stock pulley. You need to push it off the crank using the bottom of the bolt hole. If you use a 3-jaw puller, you will need a suitable insert. This is not the preferred method to remove the pulley. Many people have had "issues" - ie - insert stuck in the hole, threads trashed, etc... The Neon pulley is not keyed; it is a 6000#-load press fit. Have a "helper" put the trans in 5th gear and stand on the brakes if you have a 5-speed. This will help to keep the crank from turning while removing the pulley. 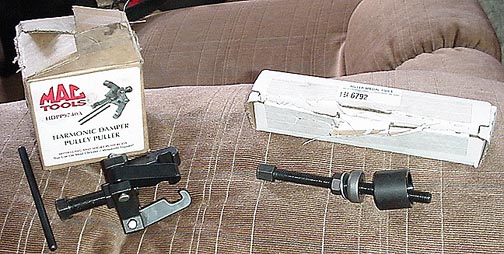 Remove the two 8mm bolts that hold the outer plastic cover to the block. 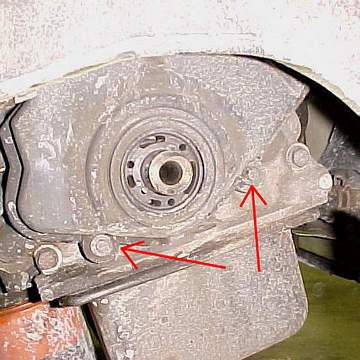 Turn the engine over by hand and line up the timing mark up on top for the camshaft gear. There is a small nick cut into the face of the gear. It should point almost straight up to line up with the corresponding mark on the plastic cover. The TDC mark for the crankshaft should also be lined up as well. Grab yourself a nice brightly colored paint pen or use White-Out for the next step. You need to make some marks on the the belt, the cam gear(s), the crankshaft gear and the block near the crankshaft gear. In the first picture, I marked the gear, the belt and the cover. I put a "C" here so that I know that mark goes at the cam. This can help minimize your confusion when you go to put the new belt back on. In the second picture, I marked the TDC marks on the block and the gear. Then I made a second set of marks on the gear and the belt again. 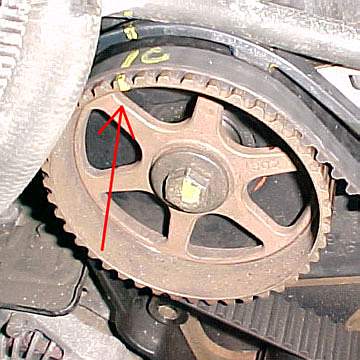 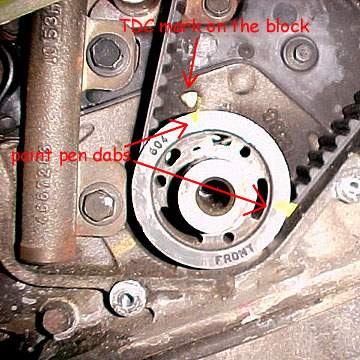 Unless your belt is already stretched, you should be able to slide a small allen wrench, nail, drill bit, etc into the hole in the tensioner. 5/64ths is the desired size. It should slide all the way through. If you can't get a pin into the hole, realize that the tensioner will "extend" when you take it out. You will need a vise or c-clamp to compress it again to re-install it. Once the pin is in place, simply unbolt the two 13mm bolts that hold the tensioner in place and remove it. The idler pulley will now be free to move. Carefully remove the timing belt. 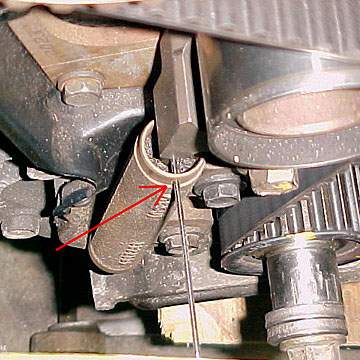 If you are going to replace the cam seal, this is the time to do it. On the SOHC, there are two 8mm bolts under the gear that hold the inner cover to the head. Grab an 8mm 1/4"-drive socket and put it on a screwdriver-type handle. You're going to use this for leverage to keep the gear from turning. Also grab an 18mm socket for the cam gear bolt. See the pic below. It's tight, pull hard! Remove that 18mm bolt and the gear slides right off by hand. Pry out the old seal carefully. Put a little Permatex or something on the outer edge of the new seal and then slide it into the head. These seals have a tendency to pop out of the head resulting in a major oil leak. The Permatex will help prevent this from happening. The face of the seal should be even with the face of the head. Use the same technique to tighten the cam gear bolt. There is a special Miller tool to hold the gear in place. Either method works fine. 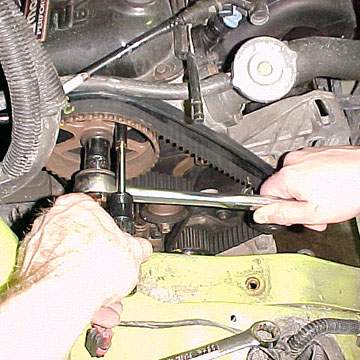 Lay your new belt over the old one and carefully transfer you paint pen/White-out marks. Thread the new belt on starting at the bottom. Slip it under the crankshaft first and go from there. Route it up around the water pump and over the cam gear. Be sure the belt is aligned correctly in all spots. Line up your marks again! If you have not disturbed the rotational settings of either the crankshaft or the cam, all your marks should be in place. Once it is around the idler pulley, slide the tensioner into place. Remember to put the longer bolt in the top hole. Do not tighten these bolts at this time. Grab an inch-pound torque wrench and a 15mm socket. Set the wrench to 250 inch-pounds if you have a "click-type" wrench and put it on the bolt inside the idler pulley. You might need another hand for this step. Apply 250 inch-pounds to the idler to take up the slack in the belt. THEN, slide the tensioner up by hand and tighten it into place. If the tension is set correctly, the pin in the tensioner should slide in and out freely. Don't forget to remove the pin! If you feel inclined, turn the engine over by hand a couple of revolutions and check the TDC marks on the cam gear and the crank gear against the marks on the cover and the engine block. Make sure they line up. Ignore your paint pen marks on the belt from now on as they won't line up right every revolution. 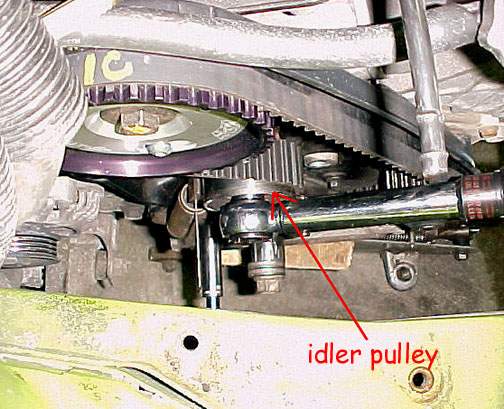 It's all easy from here. Slap the outer plastic cover in place and put in the two 8mm bolts at the bottom. Put the crank pulley back on. Jack up the engine a little and weasel the side bracket with the two top bolts back in. Drop it a bunch and put the bottom bracket bolt in. Jack it back up again to a near-normal postion. Put the alternator belt on and tighten that up. Put the power steering pump and belt back on and tighten that all up. Put the side engine mount back in. Drop the purge solenoid on and put the wire and hoses back on. Remove the floor jack. Put the front and rear mounts back in place. Put the plastic shroud back in on the side. Put the wheel back on and set the car back on the ground. Start it up and make sure everything is fine.

Back to the Neon page